It took me over 12 years from the day I decided to try and make sushi to the day I actually did it. I’d been scared of it, it looks complicated and as most things I create in the kitchen taste better than they look, I was nervous. However, once I tried it, I realised it’s actually pretty simple – especially if you know a few clever sushi hacks to make things easier. Like these…

Why Did I Take So Long to Try It?

The story goes as follows.. years ago when I moved to New Zealand and was feeling a bit lonely I was going to sign up to sushi making classes in an attempt to make friends (not sure why I had decided the ability to roll fish in seaweed was a good qualification in a buddy but…..).

I got all the kit and was just about to sign up. Then I was in a local pub and group of people in shorts came in – they were a running club called The Rat Race.

They ran, they drank beer afterwards – they sounded waaaaaay more fun than the seaweed people.

A few weeks later I plucked up the courage to turn up at the pub in my own pair of shorts – and the rest is history. Sushi making went out the window and I started running half marathons instead.

When I moved to Sydney, I lived above a sushi bar so I didn’t need to worry about it there, and until recently we had a nice sushi place in the town I now live in in England so if I got a craving I could go there.

And then one day, I walked past. The sushi train had stopped moving. No-one was scurrying around waving yakisoba. A lonely pot of wasabi sat on the floor waiting for its little soy sauce friend.

The sushi place was gone (are you sad yet?).

The day had come when I had to make sushi of my own.

What Do You Need to Make Sushi?

Once the thought was in my head, I was off – up to the Japan Centre in London (despite the fact that you can buy most of the necessary items in the ‘posh foreign food’ bit in Sainsbury’s).

I stocked up with the essentials – a sushi rolling mat and a sushi rice spoon (this is a nice kit,) 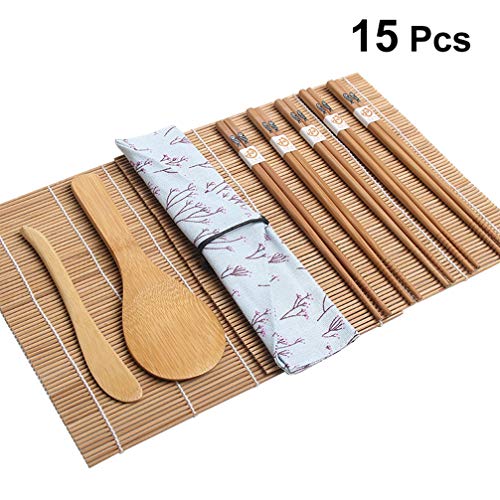 I also had the edibles – nori sheets, sushi rice, some wasabi and my fillings. I was good to go…

Three hours later one Sunday, I produced the plate of delights below. I’m not going to bore you with a step by step of sushi making, there are lots of those elsewhere online, but what I will tell you is the most important things I learned during the process…

15 Top Tips and Sushi Hacks to Use

1) Preparing sushi is not a quick job:– There’s rinsing, there’s boiling, there’s cooling, and that’s just what you have to do with the rice before you get to actually making pretty rolls of things.

Book out some time, don’t expect to whip together dinner in 15 minutes.

2) Use Sushi Rice: Okay so, it’s not really a hack, more logic –  it’s called sushi rice after all, but considering sushi rice is a bit more expensive than other forms of white rice, you might be wondering if you need to use it. And yes, you probably do.

Fact is sushi rice is not the same as other forms of white rice.

The grains are shorter and it contains more of a starch called amylose which makes it sticker than normal white rice.  It is also different from the sticky rice you find served with mango in Thailand and other Southeast Asian countries.

For the best results, you need to use sushi rice when making your own sushi.

I used Clearspring for mine as I usually do when I’m making anything Japanese.You can order it online here.

3) Wash and rinse the rice: You need to remove much of the excess starch before cooking otherwise the rice will go a bit too glutinous.

4) Consider a rice cooker: Traditionally, sushi rice is made in a rice cooker which means it’s steamed rather than boiled. If you can do this I’d recommend it as it makes the rice easier to handle.

If you don’t want to be eating sushi for the rest of your life (or take up half your cupboard space with a large rice cooker), you can buy a mini rice cooker that makes just enough rice for one or two. Have a look at this one to get some ideas.

5) To be authentic add extras: I didn’t do this when I made my sushi because it adds extra sugar, but if you want to make sushi at home that tastes truly authentic, then you need to add a mix of rice vinegar, salt and sugar to the cooked rice before you let it cool.

As a general rule you need 2 tbsp rice vinegar, 1 tbsp sugar and ½ tablespoon of salt for every cup of rice you’re using – but feel free to adjust the recipe to your taste.

Clearspring also sell rice vinegar if you don’t live near a big supermarket.Click here to have some delivered.

Then add it to the rice and fold it in gently. There’s a specific technique you should use to do this, check out the explanation by the team at Kikkoman here.

6) To cool the rice faster, fan it. Apparently, according to the Kikkoman team, this causes the rice to gelatinise which leaves it nice and glossy. Remember, the taste is only one element of perfect Japanese cooking, appearance is also essential.

How to Layout and Roll Sushi

7) You don’t need to put clingfilm on your sushi mat. This is advised in most how to roll sushi tutorials but when I tried it, it just ended up with cling film being rolled into the sushi. Gripping the mat works just as well.

Admittedly, using the cling film is more hygienic so make sure you wipe the mat down well after using it.

8) Lay the Nori Sheet correctly: Nori is the type of seaweed used for making sushi and if you look at a sheet, you’ll notice it has a shiny side and a rough one. Lay the nori with the shiny side touching the mat.

Depending on your nori sheet, you may need to cut it in half to fit it to the mat. This takes a sharp, wet knife to stop the sheet tearing.

9) Take the rice right to the edges of the seaweed: Otherwise, you will end up eating mouthfuls of dry seaweed and dry seaweed alone. This is not yummy. Do this at one end, then leave about 2cm free at the other end.

Place the filling somewhere around the middle of the rice as shown.

10) Skip the raw fish: Unless you have somewhere you can buy sushi-grade cuts of fish – and bring them home chilled, don’t do the raw fish thing.

Cut the fillings as thinly as possible otherwise, your roll will be too bulky.

11) Use natural glue: This is absolutely THE best tip I’ve discovered when making sushi at home. It simply sees you squishing a few single grains of rice on the last section of seaweed you’re going to roll. This acts as a glue to hold the whole thing together.

Making Sushi Without a Bamboo Mat

Using a bamboo mat makes rolling sushi easy, but if you don’t have one, you can still give in to your sushi fix. One way is to change the shape of your sushi.

The round rolls that you cut into pieces are known as maki, but you can also create a type called handrolls with no mat required.

Simply cut the nori sheet in half and place it on your palm. Add the rice to the piece in your palm, and gently flatten it. Then add your other toppings, now starting from the left edge, roll the filled piece toward the ‘naked’ end of the seaweed sheet to create kind of a cone shape and keep rolling. Stick it all together with a  grain of rice.

If you do want to make maki without a bamboo mat though, no worries, you can use a tea towel folded in half or a large flannel! This time you do want to put down cling film and then lay your seaweed sheet on that. Fill the roll as normal and then roll the whole thing up in the towel. It’s a bit more fiddly than using the mat, but it works.

How to Cut Sushi Rolls

When it comes to cutting the rolls, the knife needs to be sharp – and clean.

And wet. This gives you a clean cut rather than tearing through the seaweed.

Wipe it between each cut or it sticks.

How to Eat Sushi.

Hey, you’re at home, do what you like – but generally, sushi rolls are made to be eaten by hand (no, not with chopsticks as this squashes the roll) and in one bite at a time.

Also, don’t dip them in a mix of wasabi or soy sauce. Just dab on wasabi and dip the end of the roll in the sauce.

I admit I am guilty of this and I only stop doing it when I’m actually in Japan – but it does stop the rolls from falling apart!

It has a healthy image but actually, sushi is a bit of a carb bomb – especially if you do it the traditional way and add sugar to it.

Leaving this out is the easiest way to make sushi healthier but you can also hack your sushi in a couple of other ways too.

The first is to use brown rice which has more fibre which helps make the sushi healthier. Again, Clearspring is your friends here as they offer an Organic Brown Sushi Rice,.

But, you can also sushi hack your fillings and use quinoa (click here for all the details on why that is healthier and how to use it) or, you can use soba noodles to make soba sushi.

So there you have it Helen’s guide on how to make your own sushi – and making friends in Auckland. The Rat Race is still running (pun intended), if you’re on the North Shore,  go see them. They’ll be glad to have you and you’ll be glad you did.