I just spent two weeks eating my way around Vietnam and am having a bit of a craving for their national soup Pho (pronounced fuh – kind of like fur) so the other day I nipped into Vietnamese chain Pho Cafe to get my fix – and left stuffed.

Which was interesting because my meal of a massive bowl of chicken Pho complete with noodles and beansprouts was only 397 calories – my normal homemade salad at lunch contains more calories than that and I have to eat again at 3pm! I know this because the nice people at Pho have now analysed all the dishes on their menu and put a full list of Pho menu calories and other Pho nutritional information on their website making it easier for anyone who is counting cals to make their best choices – and there are more than 15 main courses that weigh in at under 400 calories.

Note: This post was originally written in 2015, but has been updated in June 2019 – good news for long term Pho fans is that most things haven’t changed. The pho menu calories are fairly consistent.

However, I know what it’s like when you’re sitting looking the menu and the ‘fried crispy spring rolls’ starter calls your name – or in my case the Banh Xeo – a pancake stuffed with chicken and prawns containing almost 500 calories that makes the friend spring rolls look saintly!

So, as per past posts of this nature (see the one on Wagamama here) I’ve pinpointed the lowest cal choice for each option on the Pho Cafe menu…..

NB: I’m using the British descriptions as I don’t know where the accent thingies are on my keyboard. While I was away I got told that one Vietnamese meat dish said without the accent actually translates as human flesh. Who knows what I could be saying if I type without them – and I don’t want to offend any Vietnamese readers. I’ve taken enough of a risk with the Banh Xeo!

The Pho Cafe Calories at a Glance

Veggie Summer rolls – 99 calories a portion (add 69 if you eat all the chilli sauce, 80 if you eat the peanut)

I don’t like Summer rolls but now I know I can choose the Large Crispy Spring roll of tiger prawns, crab and pork  – 134 calories (sans dip). I rejected it before thinking it would be a diet buster on a plate. However, I’d skip the dip and use a dab of Sriracha chilli sauce instead which is on the table and only contains 5 cals a serving.

Spicy green mango salad with pork, dried shrimps and peanuts – 175 calories is the lowest calorie option on the menu.

But it’s not the only salad on the pho restaurant menu at under 400 calories. You can also have the shredded chicken salad or the chicken or prawns with crunchy green papaya.

The Beef is the lowest option at 393 calories – the others don’t quite fall under my 400 calorie remit – but the Chicken and Prawn and the Tofu and Mushroom are only about 10 calories over.

These rice noodles wok-fried in lemongrass and chilli have a bit of a sting in the tail as you can’t eat them with the peanuts or the added spring roll and stay under 400 calories – but, if you ask them to hold the sides, your pick is the King Prawn noodles at 362 calories

If you don’t like prawns, the  thinly sliced steak is 337 calories

But you don’t need to limit yourself, all the pho containing beef or steak are under 400 (except the options with meatballs which pack in the extra cals). The chicken breast and the mushroom version with the veggie broth also come in under our 400 calorie limit.

This is the only section where you won’t find an under 400 calorie option. Seems there’s a lot of extra calories in Broken rice.  The lowest one is the chicken option at 575 calories.

If you want to find the rest of the Pho Cafe nutrition information, here’s a link to the table on the PhoCafe website

Five Reasons Why You Should Try Pho

Chances are if you’re reading this post you’ve found it via the magic of google looking for words like ‘pho restaurant calories’ – and therefore are well versed in the magic that comes in a bowl of Pho – if however, you found this another way and have never tried Pho before – here’s five reasons why you should

Want to Try and Make Your Own Pho?

There’s a whole load of recipe books out there to help you. Have a look at these…

Andrea Nugyen’s book won a James Beard prize for it’s Pho recipes in 2018 so you know they are going to be good. Click here to check it out.

Rated five stars on Amazon, in her book Simply Pho author Helen Le teaches you how to whip up a tasty bowl of pho with all the trimmings but also a heap of other Vietnamese favourites. You can find it here. 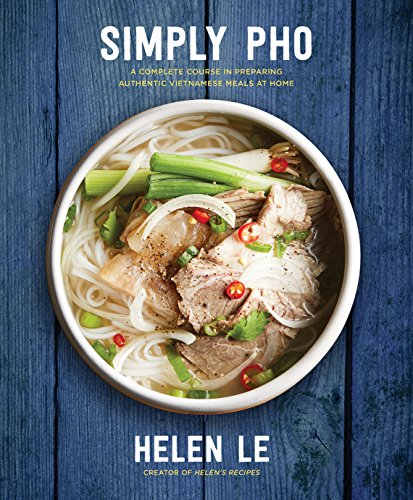 Who knew you could create 50 different types of Pho? But that’s the promise in Mattius Matthews Pho Cookbook. Here’s where to find out more.

If you like this post on the lowest calorie options at Pho Cafe, then why not share it on social media so other Pholk (sorry) know what to order too. You’ll also find a whole load of other calorie guides to UK chains in our calorie guides section, here.