I love testing things I see in the newspapers – there was the happy morning I spent practising trying to stand up from a seated position without moving my hands (supposed to determine how long you’ll live)… this morning I was lounging about catching up with the week’s news and I spotted this….the seven-minute workout that’s as beneficial as a long run.

Next thing I know I’ve got my trainers on and a stopwatch and I’m leaping up and down doing Star Jumps. About 60 seconds later while balancing against the wall with burning thighs I’m regretting this decision. The Seven-Minute Workout might sound easy….but it hurts. How to do The Seven-Minute Workout

The principle is this.

There are 12 moves and you must do each of them for 30 seconds, then take a 10-second rest before moving to the next one.

Aerobic moves must be done as hard and fast as you possibly can – and apparently, you should be in pain afterwards.

A full set of the moves in the seven-minute workout (and the paper) can be found by clicking here, but in a nutshell it’s….

Jumping Jacks, Wall Squats, Push-Ups, Crunches, Step-ups on a chair, Squats, Tricep Dips, Plank, Running on the spot, Lunges – and just because they want to kill you at the end, a Push Up with rotation and then a Side Plank.

These must be done in an order that means you don’t work the same body part two times a row – so, you might follow jumping jacks with tricep dips, then do some running on the spot, then go down into a plank.

How Does the Seven Minute Workout Work?

According to the team that created it, it’s based on a protocol known as High-Intensity Circuit Training.

This uses your body weight to create resistance and, because it’s done so fast, works your cardiovascular system at the same time – which makes it a bit more time-effective than strength training done slowly.

Also, because all of the moves use the large muscles of the body they burn more calories per move than those using smaller ones.

On top of this, the researchers say that the combination of working large muscles quickly and then moving to another set of muscles with no rest provides the maximum release of fat-burning chemicals and growth hormone – and that’s the ultimate combo for building muscle AND stripping fat.

It’s also been positively shown to improve fitness and lower insulin resistance. – that’s where your body stops listening to the signals from the insulin you produce meaning your body needs to make more of it. This is linked to the development of type 2 diabetes.

How Many Calories Does the Seven Minute Workout Burn?

The researchers don’t specify but, you can make an estimate.

You’ll also get some level of afterburn – where your metabolism is raised – for up to 72 hours after doing it.

What that means is, this isn’t a workout that’s going to cause you to shed a lot of weight quickly. Yes, it will get you fitter. Yes, it’s been shown to shred fat when you do do it – but should it be your only workout if you’re trying to lose weight – probably not (although see ‘the catch’ below.)

Hmmm, I have a mixed verdict. It’s a great all-round workout – although the 10-second ‘rest’ is a misnomer as it’s about the same amount of time as it takes you to get into the next position. However, waiting for longer will reduce the effects of the workout so it’s important that you don’t cheat and take a longer rest.

Yes, some of the moves are killers, but I think that’s more to do with your own personal weaknesses than anything else.

The cardio was easy for me (although I could probably go harder if I did it again now I know what to expect), the exercises where I’m strong – like squats, press-ups, lunges and normal planks were also fairly easy as I don’t think I could do those faster without losing form and risking injury – but those where I’m weak (wall squats as they hurt my knees, the last two and the tricep dips) did hurt a lot. I was puffing by the end of it but I hadn’t broken into a sweat.

At this point, I was confused. Did the seven-minute workout feel as hard as my 5k Park run yesterday morning? (40 seconds off last week – new PB – nearly threw up at the end) – erm no. I also wouldn’t say it was as tough as my Educogym weights (although it’s along the same principle – lots of reps to fatigue and no rest in between). Does this means the scientists have lied?… Also, no.

You see if you read all the way down to the end of the actual paper on the Seven Minute Workout, they explain that most people on their own won’t reach the intensity you need to get results from this program in one seven-minute set.

To reach the intensity that they measured in the trial you need to be working at about 85% of your fitness capacity – that means working HARD. So hard that you have to stop at the end of seven minutes because you can’t actually do any more. That’s extremely hard for most people working out on their own to do – and also wouldn’t be recommended for those with health problems without medical advice.

They, therefore, suggest this isn’t a workout you do once. It’s actually designed to be repeated 2-3 times – giving you 14-21 minutes of exercise, not a seven-minute workout.

Suddenly it all becomes clear – now that would be a killer workout.

On paper, the Seven Minute workout sounds like a dream. Get fit in less than ten minutes – and, done hard it will boost your fitness, no question.

However, you have to be willing to push yourself.

If you’re thinking you’re going to lose heaps of weight in seven minutes though that’s unlikely.

This doesn’t mean don’t do it – because it can be done anywhere, the seven-minute workout is a brilliant thing to do on days where you’re just too busy to fit in anything else, or, on holiday if you just want to keep your fitness up without having to hit the hotel gym.

To get better weight loss results, you’ll need to do more than one set.

Still Want To Try It?

Davina McCall has a set available to stream via Amazon Prime. you can pick one or buy the whole series – it’s also free if you sign up for Prime. Click here to check it out.

If you prefer your workouts old school, She also has all ten sessions on DVD 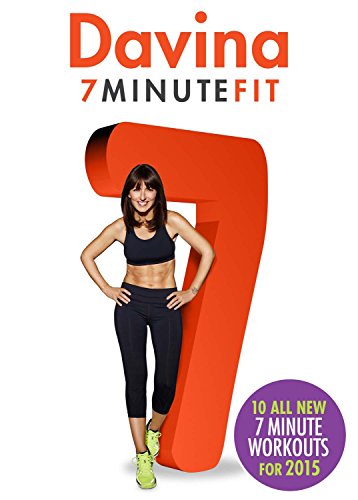 Admittedly, they might not follow the exact protocol you need for optimum results but, at least having someone jumping around in front of you might help you keep the speed up higher than you might perhaps do alone.

If you like the idea of speedy workouts, have a look at the Roxanne Workout, which can tone your arms in the time it takes for Sting to sing the Police song.

2 thoughts on “Can You Really Get Fit in Seven-Minutes? The 7-Minute Workout Explained”