(ad-gifted) That title might sound a tad hyperbolic, especially as I was given the product to try so you might think I’m biased, but honestly, I’ve never been as in love with a kitchen gadget as I am with the Morphy Richards Saute and Soup Maker.

But I am getting ahead of myself…

Our story begins when I made an interesting discovery; the only source of sugar in my diet for a week was in tinned soup. As I’m attempting to avoid all the yummy sources of sugar like chocolate, biscuits and ice cream I had to ask myself, why am I eating it in the shape of Scotch Broth? The answer, of course, was because soup without sugar has to be made at home from scratch, and while this does happen in this household, it requires the culinary skills of The Boyfriend, three hours boiling of a chicken carcass and something that involves bones, sieve and kitchen roll that I choose not to watch so soup making must therefore always remain the domain of The Boyfriend.

However back in January, I mentioned the Morphy Richards Saute and Soup Maker in another article. They didn’t have samples at the time but then someone asked me if I’d like to try one…..erm, yes. Was the answer.

What is the Morphy Richards Saute and Soup Maker?

Basically, it’s a big kettle – but instead of adding water to it, you add water, stock, soup ingredients – and push the button. 21 minutes later you have soup.

What makes the Saute and Soup maker different from the other Morphy Richards Soup Makers though is that it has a saute option.

This means you can saute things like garlic, ginger, bacon or onions before you put them into your soup which enhances the flavour – I admit, I don’t do this but that’s because I’m lazy – but, it’s a definite bonus if you’re a proper foodie as it means one less pan to wash up.

The model number for the Saute and Soup Maker is the 501014.

The main things you need to know about it include…

That it has four different types of setting – when you’re making soup you can choose smooth or chunky – and, if you want to refine things further you can use the blend setting to create a smoother taste.

There is also a juice setting which you can use to make smoothies or milkshakes.

The machine holds 1.4 litres of liquid which is enough to make four servings of soup.

The thing I really love about it is that it’s just so easy – I like cooking but I hate prep, with this, I can just chop things roughly, throw in dry lentils, stick in a stock pot and some water and it does it all for me!

One of the main reasons I don’t use gadgets in my kitchen is I can’t be bothered to clean them. It just seems like a total faff – this, however, is relatively easy.

The downside – you can’t put it in the dishwasher – the top part has electrical workings and the power lead socket is attached to the main jug, so you do have to wash it by hand. It’s pretty easy though. I fill the kettle jug with water when I empty it – and come back and swoosh it with a washing-up brush.

I have found it best to wash the top lid part before you sit down though – it’s got temperature sensors and other bits on it and if the soup dries on these it takes longer to clean. Rinsing it immediately is much faster.

If even this is too much effort for you (no judging, I am with you on this) then you might want to check out the Morphy Richards Total Control Soup Maker –  this does pretty much everything that the Saute and Soup Maker does but with the added bonus that you can put the inside of the main jug in the dishwasher – and it makes smaller portions.

Admittedly, I wasn’t expecting much. I certainly wasn’t expecting to be eating scrummy lentil and bacon soup a few days later with The Boyfriend shaking his head, asking ‘so this is just stock, lentils and bacon?’….cue another head shake.

Frankly, this thing is amazing. You pop in anything you want to saute and stir for four minutes, then you add stock, lentils and any other ingredients, put the lid on, choose if you want smooth or chunky, then let it do its thing. Which it does. IN 21 MINUTES. That’s right you ignore the bubbly kettle looking thing for 21 minutes then open it and you have soup. We’ve made four more different types since and, other than a brief onion related disaster which had to be saved with beans and nutritional yeast, they’ve been really good. We’ve just bought the ingredients for chicken and sweetcorn which is Friday night’s experiment.

If I did have to criticise it, the only thing I don’t like is that while the manual comes with a heap of recipes in it for you to follow (and, if like me you’ve lost your manual and are looking for soup maker recipes, you can find a copy here) they don’t give a foolproof formula to use when trying to make your own recipes so it’s a bit trial and error when you branch out on your own.

Other than that though, this Morphy Richards Soup Maker is THE best kitchen gadget I’ve ever owned.

And no I’m not on commission as my friend suggested after a particularly out of character Facebook rave about said item. I’m just souper impressed (sorry). Yes, now this post has affiliate links in it, but when I first wrote it – I didn’t even know what those were!

If you want to try it yourself, you can simply by clicking here and next thing you know you’ve got a Soup Maker turning up at your door and 21 minutes later….soup!!!

My Recipe for Celery, Lentil and Bacon Soup in a Soup Maker

Oh and if you want the recipe for the NYNHB Celery, Lentil and Bacon soup I talked about above, here’s what I did. This serves 2 – to serve four just double the quantities.

2 slices of unsmoked back bacon

Splash of vegetable or olive oil

Chop the bacon into small pieces – I use unsmoked bacon as I think that smoked bacon overpowers the soup.
Then chop the celery.
Add the oil to the soup maker, switch it on to the saute setting. Let it heat for a minute then saute the bacon and celery for four minutes. Stir this well so it doesn’t stick to the bottom of the ‘kettle’
Make up one litre of chicken stock with two stock cubes.
Add the stock and 75-100g of dry red lentils to the gizmo (split peas work too and are even cheaper).
Chuck on the lid, turn it onto smooth setting go bath, run, type and blog post for 21 minutes and wait for lots of beeps.
Open. Pour. Eat soup!

It really is that simple.

As I said, the link above will take you to the Soup Maker Manual which includes recipes like Tomato and Basil soup or Coconut Chilli and Butternut Squash – if you want to experiment further though have a look at the titles below.

I Love My Soupmaker

Despite the fact that I could have written this, I didn’t – it’s made by the team at CookNation and is packed with recipes you can make in under 30 minutes – by soup maker or traditional cooking. Click here to see more 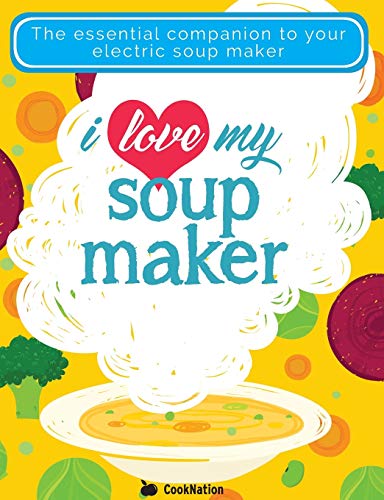 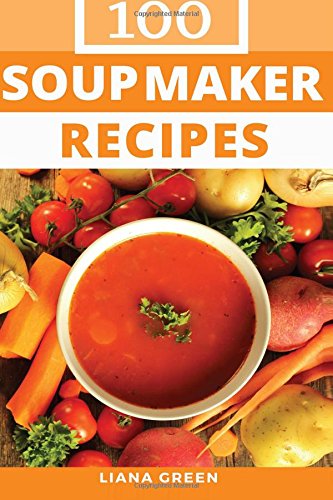 Soup is a great food to eat if you’re trying to lose weight. It’s highly nutritious and very filling. This book helps boost results further by offering 100, 200 or 300 calorie recipes for you to try. Click here to see more details 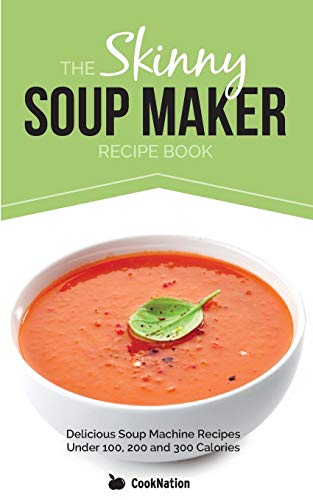