‘Oh please test this for your blog, it’ll be really funny’ – said the email from my friend (a fellow health journalist) about the new Universal Contour Wrap Home Kit – an at-home body wrap kit. See, this is what happens, eat a few insects, bury yourself in a few tonnes of sand, get electric shocks during a workout and next thing you know, other journalists are using you for amusement. I do admit though she had a point….there’s bandages to wrap yourself in, there’s clay, there’s measuring tape. It sounds like a hoot.

My biggest problem was finding a day when The Boyfriend was going to be out for long enough to truss myself up like Tutankhamun’s less sexy sister – unlike glam lady above, my bandages were thick and pink and I figured, me wearing pink surgical bandages is not an image he needs in his head.

I was figuring it would take me at least 30 minutes to wrap myself and then I had to lie still for 60 minutes. Thankfully the stars aligned last Wednesday – something to do with the brakes on the car, I wasn’t really listening past the ‘I need to go into the garage for a couple of hours’ bit. Once I’d checked he’d got a flask of tea and wasn’t going to reappear any time soon, I was off to the bathroom.

How Easy is it to Use an At-Home Body Wrap?

I decided to wrap my legs – figuring this is where I normally hold the most fluid. The instructions say to apply the clay so you can’t see any skin. Erm, unless I’m an elephant that’s not going to happen. The clay is thin and gray, my skin is pink, try as I might I could not get it thick enough to conceal everything so I just slapped on as much as I could and hoped for the best.

The wrapping was bizarrely easy. I was expecting comical contortions or at least one end to fall off while I tried to wrap the all the way up but things stayed surprisingly well in place, and because you wrap fairly tightly, it was easy to tuck the ends in place.

Three bandages on each leg and I was getting flashbacks of my recent knee operation.

Despite my binding, I managed to waddle onto the bed with a pile of magazines and lie there for an hour. It turns out this may not have been the most sensible plan when covered with damp clay as some moisture does escape the bandages. There may have been judicious use of a hairdryer on the duvet.

How Many Inches Do You Lose with the Home Kit?

Sixty minutes later it was time to unwrap. Then it’s measuring time. You’re given a tape measure and told to measure three points before you wrap – marking them with ballpoint pen so you can measure the exact same point when you’re finished.

My results were a little disappointing. I didn’t lose anything off the first two points, but I did lose a centimetre from the top of my leg.

I was however undeterred – because the process had been so easy, the next day I decided to wrap my stomach.

Basically, it was puffy, the car was still broken so himself was in the garage again, and I had a whole load of unrolled bandages in the bathroom.

On went the clay, on went the bandages, back to the bed I went (this time I took a towel). More magazines, another 60 minutes…..and then it was time to measure. This time, there was a result. A big one. Huge. I lost 4cm from the bit around my belly button alone and I could physically see a difference. Obviously, whatever it is that’s making me puffy around the middle responds kindly to compression.

Of course, none of the inches removed by any of the body wraps for inch loss out there mean you are losing are fat. It’s squeezed out fluid and the effect of flattened tissues, but if you’re going out and suffer fluid retention it could make you feel more confident in your frock. 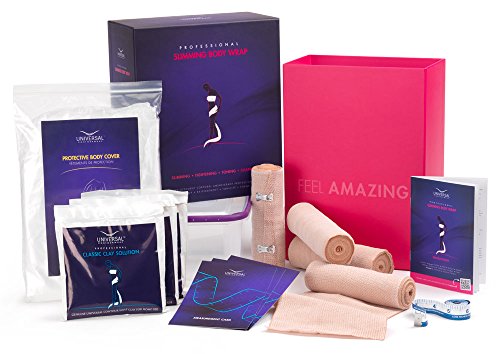 Another benefit is that the Universal Contour Wrap home kit – and many of the other at-home body wrap kits out there –  is considerably cheaper than a salon wrap as the bandages are washable and there’s enough clay for three wraps. You can also buy more clay and bandages if, when you run out – you don’t need to buy the whole body wrap kit again.

But before you click to buy it, a couple of quick final tips if you’re going to try a body wrap at home.

You get chilly by the end of the treatment so make sure the house is warm and run a hot shower or bath for when you’re finished.

Also, the clay gets everywhere. If you have white towels, white walls or carpet, be afraid. Very afraid.

The effects of a body wrap will last a day or two – if you’re doing it before a special event, it might help to limit carbs the day of the event as well. Wraps are dehydrating though so don’t skimp on water or you’ll just end up at the party with a headache.

Where to Buy the Universal Contour Wrap Home Kit

If you want to try it, the Universal Contour Wrap Home Kit you can buy it via amazon. Click here to check it out..

If you’re looking for other gizmos and gadgets that claim to reduce inches fast, see what happened when we tried the Lipolift machine.