Okay, so this is weird. Yesterday I exfoliated my face with an electric toothbrush – and I’m not totally sure why.

I’m pretty sure I read about this idea in a magazine this weekend – and that it was recommended by a dermatologist – but, when I went through all the pages I tore out of my mags, I couldn’t find it anywhere. This could either mean I had some odd cheese-related beauty dream where a facialist angel spoke nonsense to me – or, it could actually be out there somewhere in the pile and I just can’t see it, who knows. But before I did it I did wonder if I was about to do the dental equivalent of this…

Still, once I’d got the idea of using an electric toothbrush on my face idea in my head it had to be tried – particularly when fate intervened and The Boyfriend bought new toothbrush heads. This meant the old, broken in, soft one was going begging.

Now before you shriek euuuuwwwww – I didn’t use it as is. One of the ‘useful’ things I have learned in my job is that the average toothbrush contains 100 million bacteria. The brush head was therefore given a small bleach bath and a lot of dunking in boiling water.

Then, on went the Carrot Butter Cleanser, on the forehead went the Sonicare and brrrrzzzzzzzzzz. Two minutes of vibration later and I’ve got watery eyes, an itchy nose and an unbearable urge to sneeze – but my skin has a nice glow.

Today I seem to have a spot on the side of my nose but no other untoward side effects. I’m figuring it’s like a Clarisonic but without the three figure price tag.

A quick google seems I’m not alone in trying electric toothbrush exfoliation – other beauty folk have done it – and some swear by exfoliating the face with a toothbrush.

And so I wanted to know…is what I’d spent my time doing sensible, or completely insane – and so, I put out some feelers.

Can you exfoliate your face with an electric toothbrush?

I asked a few contacts – apologising for the slightly strange question…

The reply I got back blew me away…

‘It is not a strange question at all! I work with Philips and launched the Sonicare sonic toothbrush. The same technology was used to create the Clarisonic skin cleansing brush which I also launched,’ said PR Tracy Posner from the group Positive Communications.

Woah, so I was onto something after all. I fired off a few more questions to Tracy who was kind enough to tell me more about the story.

‘The Clarisonic was developed by the same team who created the Sonicare sonic toothbrush – the Optiva Corporation which was a commercial offshoot of the University of Washington,’ she told me. ‘It was sold to Philips Oral Healthcare in 2000. The team then used the same core sonic cleaning technology they had pioneered and adapted it to create a skin cleaning brush with the aim of helping to transform the skin in the same way they had transformed oral health care.

The founders spent months researching the market, learning about skin problems and tossing around potential solutions. Then they started developing a technology that would deliver a more effective way to clean people’s skin –which they found was a lot more complicated than simply transferring Sonicare technology into a toothbrush for the face.

The breakthrough came after a dermatologist gave a presentation featuring oversized images of skin-clogging plugs called comedones. Literally the next day they started to develop the concept of a brush which moved the skin in a way, that would dislodge comedones. From there, the team pursued a design featuring bristles that oscillate in different directions, loosening and clearing away the grime that causes blemishes.’

But Did It Mean That Toothbrush Exfoliation is Okay for Skin?

To answer that question, I got in touch with Dr Safa Al Naher from London dentist Care Dental Platinum who works with teeth, but also aesthetic procedures, and asked them if using the brush in this way could harm skin?

“I tried it and found I actually liked using an electric toothbrush to cleanse and exfoliate my face more than I thought I would. It was like I could see the exfoliation happening and I was left with a tingling sensation and very smooth, clean-feeling skin,’ she told me.

‘However, I don’t think I would do it every day because it does give a deep exfoliation and might be too abrasive, but a couple of times a week would be beneficial for those with healthy, uncompromised skin.

However, I wouldn’t recommend it to anyone with irritated, broken or burnt skin or for patients who suffer from rosacea, or very severe acne.’

‘Despite the fact that their technologies are similar, the vibration of the toothbrush will remove dead cells, but, it doesn’t move in exactly the same way as the Clarisonic,’ says Tracy. ’Clarisonic brushes work with the skin’s natural elasticity by gently moving back and forth on the surface at a rate of approximately 300 movements per second (180,000 a minute). This creates special tension between the inner and outer bristles of the brush, which separates the dirt and oil away from the skin.’

Not only does a toothbrush ‘only’ vibrate at 31,000 strokes a minute, it doesn’t ‘wobble the pores in the same way.’

‘That’s why using the Clarisonic is scientifically proven to remove six times more makeup and twice as much dirt and oil than cleansing your face manually,’ says Tracey. 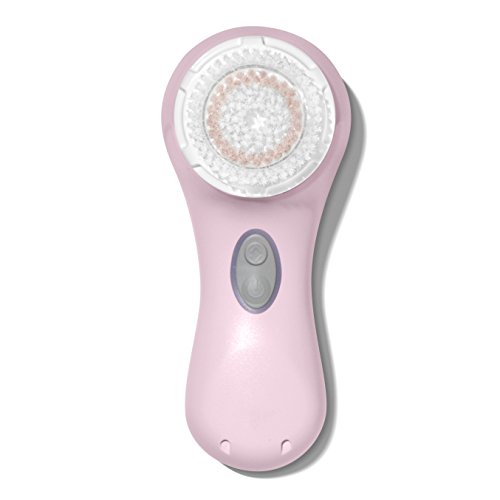 On top of this, as you can see above, the head of a Clarisonic is much bigger than an electric toothbrush and so, the process is considerably quicker.

‘The size of a toothbrush head is definitely a slight disadvantage because it doesn’t cover as much area in one go, and because it’s concentrated over a smaller surface area,  you have to be very careful with the pressure you could traumatise the skin if you press too hard. On the other hand, the small size does allow you to reach books and crannies such as sides of the nose and the temple area and upper lip,’ says Dr Al Naher.

So, what do you need to know if you’re going to try exfoliating with an electric toothbrush?

‘Obviously, you should use a brand new brush head – not one that contains bacteria from the mouth,’ says Dr Al Naher. ‘I would also advise a super soft head which is suitable for sensitive gums, in as large a size as you can find.

Always clean the brush head well in hot water and soap after use.

I would also use wet the skin with a cleanser, to reduce the friction and allow to glide over the skin. I would then recommend your usual toner with a cotton pad to remove remaining dead skin cells. And lastly, apply a good quality moisturiser after to protect the skin’s natural barrier.’

So, there you have it. Yes, you can exfoliate your skin with an electric toothbrush – but, it’s not quite as good as a specialist facial brush – and, now, many years later after having finally splashed out on a Clarisonic Mia I can tell you that they also don’t make you sneeze!

So, if you want to do the same, check out the clarisonic range here.

I do admit, it is still a little bit spendy, so, if you’re on a budget, you might also want to look at my review on the The Ayvo which launched around the same time as I wrote this as a cheaper rival to the Clarisonic.

But I do now love my Clarisonic. In fact, I’ve just ordered another new head for it! Oh, and The Boyfriend is also still using the Sonicare! Just on his teeth though.

2 thoughts on “The Sonicare Face Scrub: Can you Really Exfoliate with a Toothbrush?”