We have those answers and more – and we also explain why you might want to start adding a sprinkle of nutritional yeast to your meals even if you do still eat meat.

What Are Nutritional Yeast Flakes?

I first heard about nutritional yeast a while ago when a nutritionist I was talking to suggested them as a good alternative to adding salt to food – they give a similar taste pep up.

They’re also big in the vegan community as a way of creating a dairy-free cheesy taste.

But as to what they actually are, well…

Nutritional yeast is the food version of a yeast known as Saccharomyces cerevisiae which is normally used in the brewing of beer or the baking of bread.

With nutritional yeast, it’s been specially grown and washed and then heated which deactivates it – this means it doesn’t have the same properties as cooking yeast.

Put this in your bread and it will not rise beautifully! But your flatbread will taste nice! On which note…

When I first bought mine, the owner of the health food store I was in was singing their praises saying she eats them by the spoonful.

They’re a bit like eating sawdust – or, for lovers of Japanese food, they have a similar texture to those ‘dancing’ fish flakes that wave around on dishes like okonomiyaki pancakes – but they do have a very moreish taste.

I’ve been trying them on salads and find I don’t need as much dressing to liven things up when I do – they go very well with spinach, avocado and sundried tomato. I haven’t had any mashed potato this week but I can imagine they do really give it some zing.

Nutritional Yeast naturally contains B vitamins and minerals including zinc and selenium but some brands also add extra B vitamins during its processing.

This is known as fortified nutritional yeast and is ideally the type you should buy if you are going to start using it.

It’s also a good source of protein – and is a complete protein which means it contains all the amino acids you need from food. Not many foods actually do that, particularly vegan foods which tend to include only one or two of the nine essential amino acids we need in our diet.

Nutritional yeast also contains compounds called beta-glucans which are thought to support immunity and may play a role in lowering cholesterol.

Its main selling point for vegetarians and vegans though is that it is one of the few, non-animal food sources of vitamin B12.

B12 is one of the most important vitamins we need for energy. It’s also involved with a process called methylation which helps your body detoxify.

Because plant foods contain virtually no B12, over time, vegans can become B12 deficient. Although they might not realise as symptoms of B12 deficiency like tiredness, headaches and low mood can be attributed to many other things.

One 5g tablespoon of nutritional yeast contains 2.2mcg of vitamin B12, which is 88 per cent of the suggested amount you need each day.

Do You Need Nutritional Yeast if You’re Not Vegan?

It’s estimated that around six per cent of the population under 60 is B12 deficient and that this rises to 20 per cent in those over 60.

You see while one reason for B12 deficiency is not eating foods that contain it, you can be eating a B12 heavy diet, but not absorbing all you take in.

Some of this is down to age as our levels of stomach acid and other substances we need to absorb B12 slow down with age, but also because we’re more likely to take medications that affect B12 absorption as we get older.

PPIs – proton pump inhibitors – that many people take to reduce symptoms of acid reflux lower levels of acid in your stomach – the acid you need to absorb B12 – one study suggested that there’s a 65 per greater chance of B12 deficiency in people taking PPI’s for more than two years.

Another drug, metformin, used to treat type 2 diabetes also interferes with B12 production.

If you’re therefore on any of those drugs, you might want to increase the levels of B12 in your diet – and a spoonful or two of nutritional yeast flakes can be a good way to achieve it.

One of the B vitamins in nutritional yeast – tyramine – has been linked to migraines in some people. A symptom diary can help you work out whether or not it’s causing problems for you.

Folic acid can be added to fortified nutritional yeast and some people prefer not to use the synthetic form of this.

Yeast based foods, in some people, can be linked to a problem called histamine intolerance. Again, if you notice any unusual symptoms after eating nutritional yeast, you might want to investigate this further.

Are Nutritional Yeast and Nooch the Same Thing

I mean you can kind of see why they renamed it can’t you. Nooch sounds cool and sexy, nutritional yeast sounds itchy and not something you want anywhere near your mashed potatoes!

How Many Calories are in Nutritional Yeast?

What About Other allergies?

It’s also dairy-free- and is a great substitute for those that miss the taste or creaminess of cheese but who can’t, or don’t want to eat dairy.

Although, as we said above, it may cause problems in people who react to histamine so, if you have allergies, just watch out for that.

7 Ways to Use Nutritional Yeast

I’ve been using it sprinkled on salads to liven up the flavour, but other suggestions include…

Stirring it into soups to give some extra depth of flavour

Using it instead of cheese in cheese-based sauces – and dips

Adding it to scrambled eggs or omelettes instead of cheese. Obviously not if you’re vegan, but it also works on tofu scrambles.

Add a sprinkle on top of pasta – or jacket/mashed potatoes – it’s also good on top of baked beans.

Stir it through risotto rice to add depth and creaminess.

Use it instead of parmesan in pesto (find the recipe here)

Try it instead of salt on popcorn, kale chips, homemade tortilla chips, roasted chickpeas – or any other moreish nibble. 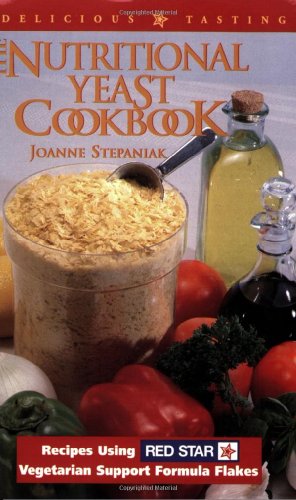 Where to Buy Nutritional Yeast

So you’re probably wondering where you can buy nutritional yeast flakes. They’re available in most health food shops and you can also get them online. Engevita Yeast is one of the best known brands.

Oh and talking about shopping for vegans, I came across a cool website the other day which finds gifts for all sorts of people (I might have been hunting gifts for The Boyfriend and came across the Gifts for Engineers list) – and they have a whole section on gifts for vegans. So, if you have another vegan in your life, or, just want to buy yourself a present, you might want to check it out. Bit random I know, but I was fascinated by the thought they’d put into some of the lists.

If you also like shaking up your diet with new foods, you might want to check out some of the other items in our ‘What the Heck Is’ section.